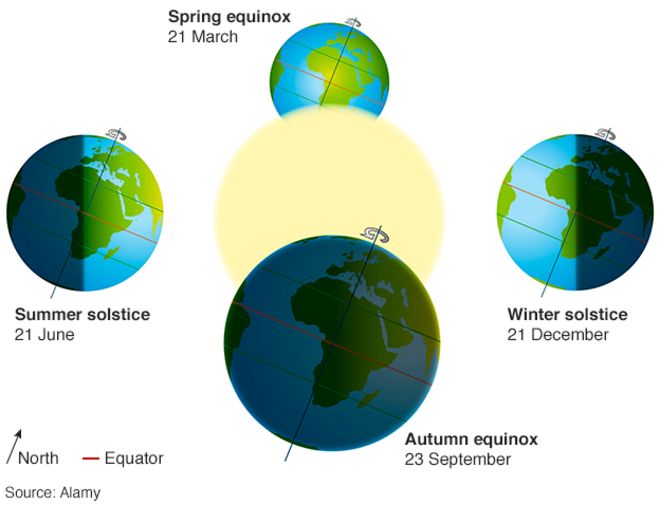 The equinox is being celebrated around the world – heralding autumn in the northern hemisphere and spring in the south. What is an equinox and how does it work, asks Justin Parkinson.

The name equinox means “equal night” in Latin. It’s theoretically the day of the year when all points on the earth’s surface experience the same lengths of daylight and darkness – 12 hours of each. The autumn equinox in the northern hemisphere (it’s the spring equinox for the southern hemisphere) always falls on 22, 23 or 24 September.

Imagine the earth orbiting the sun in a flat plane – ie as if it was pinned on the edge of a slightly elliptical disc. It spins on its axis as it does so – each turn making a day. But the earth also constantly tilts at an angle of 23.5 degrees to that flat plane as it orbits the sun.

This means, for half the year, the northern hemisphere is pointing slightly away from the sun, bringing shorter, colder days as it moves into winter. For the other half of the year it points slightly towards the sun, getting longer, hotter days, most extreme in high summer.

But the equinoxes (there’s one in March, too) are the points of the year where the part of the earth closest to the sun is the equator rather than places north or south of it. Everywhere from the North Pole to the South Pole gets the same number of hours of sunlight, just for those two days a year.

One thought on “Who, What, Why: What is an equinox?”