Witches do celebrate during Halloween season, but, for them, it’s a very different holiday. 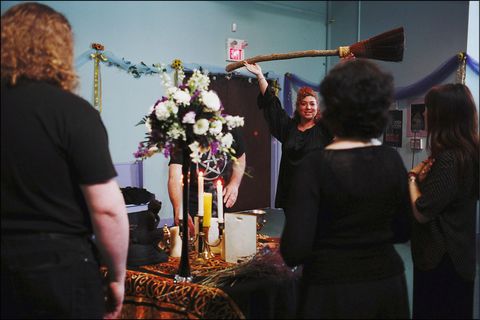 Witches are among us, and far more of them than you think. Today, when people talk about “witches” in this country, they are often talking about members of the “Pagan” movement, a group of perhaps as many as 1 million Americans whose practices draw from a combination of pre-Christian European religions, Western occult and Masonic societies, and forms of witchcraft. I spent much of the last five years immersed in the American Pagan community — first at arm’s length, as a journalist; then as someone personally curious about the rituals I’d observed; and finally, for a couple of years, as an active student and participant. The result is Witches of America, both a snapshot of present-day witchcraft across the United States and a memoir of my own searching and questioning. Now that we’re in the thick of Halloween season, here are some facts about witches that may surprise you.

1. Witches are often invisible. Not literally, of course. But the women and men who consider themselves witches or Pagans don’t always announce themselves in goth gear, tattoos, and piercings. Many are just as likely to dress in utterly innocuous ways — in the daily uniforms of, say, a single mother driving her kid to track practice, a grade-school teacher, a tech entrepreneur, or a cashier at Trader Joe’s. Morpheus, the Pagan priestess who served as my personal entrée into the witchcraft community in the Bay Area, was actually working for an environmental protection group when I first met her. She’d drive to work in a pickup, dressed in khakis and a hoodie, her hair in a long red braid. The local ranchers she consulted with had no idea that she regularly hosted rituals under the moonlight out on her property, just a few miles away.

Some witches choose to remain “in the broom closet,” as they call it — because they work for the government or with children, live in a conservative community, or are simply afraid that the word “witchcraft” still carries too much baggage. At the same time, since the ’80s, Pagans have been gathering in outdoor festivals and indoor hotel conferences all around the country, sometimes in groups of a few thousand. And with the rise of the Internet in the ’90s, vast networks have also spread online, making it that much easier for someone Craft-curious, in an area without a visible Pagan presence, to connect with a mentor in a chat room.

2. While Hollywood horror films have (unfairly) made witchcraft out to be the work of the Devil, they’ve gotten plenty of details right. Pagans are not interested in worshipping the Devil — many would say that the Satan of Christianity is a god they don’t even believe in — so that’s a major strike against the Hollywood horror-movie depiction of witchcraft. On the other hand, there is a certain amount of drama and flair to ritual magic that the movies have come close to getting right. Witches do gather in a circle to perform rituals, sometimes outdoors, under the moon. They use wands and ritual daggers (or athames) to guide magical energy in the right direction; they chant, sometimes in ancient languages. Depending on the specific tradition a person trained in, they may also practice magic while “skyclad,” or in the nude. This isn’t an invitation to sex but instead a way of letting go of the mundane, material world and entering a heightened state that allows for more powerful magic.

3. Most witches follow a strict moral code. Returning to the sinister Devil-worship thing: The horror-movie assumption that anyone who labels herself a “witch” is out to harm others is false and unfair. This community follows an ethical standard that’s similar to a concept of karma: The Threefold Law warns that any action you take will come back at you three times over. Or, for witches of the Wiccan tradition, there’s the Wiccan Rede: “An’ it harm none, do what thou wilt” — follow your own lead, as long as you don’t cause harm to anyone else.

Yes, some witches perform “hexes,” and a personal or coven rivalry might, in a rare situation, escalate into a “witch war.” But this kind of behavior is frowned on. The goal, as with many religious practices, is to bring yourself closer to spiritual enlightenment and balance — which is that much harder to achieve if you’re busy creating chaos.

4. Witches often do practice in “covens.” A witchcraft tradition can spawn many “lines” (or splinter sects) founded by the disciples of